Management of genetics applied for breeding at JANVIER LABS

The genetics reliability of research models is one of the essential conditions for the success of the research programmes. 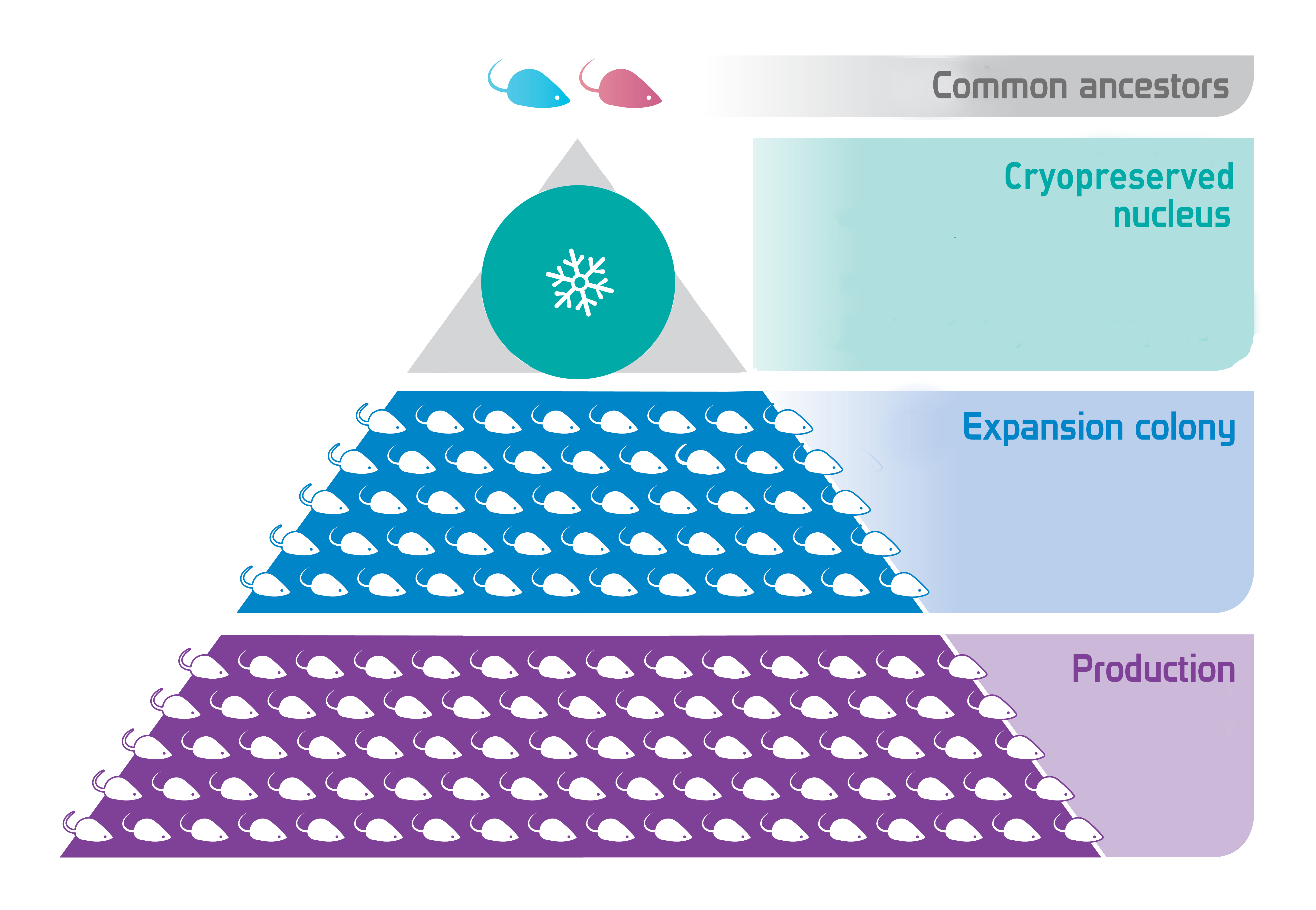 The policy guarantees a genetic stability for the JANVIER LABS models

In order to provide researchers with research models with a high quality genetic, JANVIER LABS has developed a genetic management policy by putting in place essential rules for the genetics management of its models. This policy is based on modern breeding management tools such as: cryopreservation and embryo revitalization.

The JANVIER LABS GENETIC POLICY® allows us to ensure the genetic homogeneity of our strains delivered to the end user by performing rigorous genetic management at three levels (nucleus in cryopreserved embryo form, expansion colony and production colony). It prevents our models from genetic drift.

The integration of modern techniques such as cryopreservation and revitalization of embryos allows us to freeze our nucleus. Thus we slow down the evolution of the model which increases by one generation every 25 to 50 years instead of 2 generations per year.

JANVIER LABS can thus guarantee the genetic stability of all its models over time.

There should be only one genetic nucleus for a model.

The control of genetics is a crucial point in the management and the breeding of research animal models.

It is unrealistic to claim to produce identical strains starting from different nuclei.

We have cryopreserved our models and this gives us several advantages:

Management of expansion and production colonies

According to published works of Drake (Drake, Ann NY Acad Sci 1999 May 18, 870: 100-7 .Review) and Chamaray (Mol Biol Evol.21: 1014-1023) on predictions of the number of mutations in a population of rodents, the risk of genetic drift (occurrence of a mutation sufficiently severe to alter the gene function and therefore the phenotype) becomes significant beyond 10 generations, starting from the origin population.

When replacing breeders of a laboratory rodent population, all the breeders in that population must be replaced. We cannot afford to replace only a part of these.

Our breeding procedures plan a complete stop of the colony after 10 generations maximum from the cryopreserved nucleus. New breeders from freshly revitalized embryos are set up in a new protected unit to maintain the supply to our customers.

We do not apply any “refreshing” or “infusing” technique which consists in replacing only a part of the breeders, periodically. 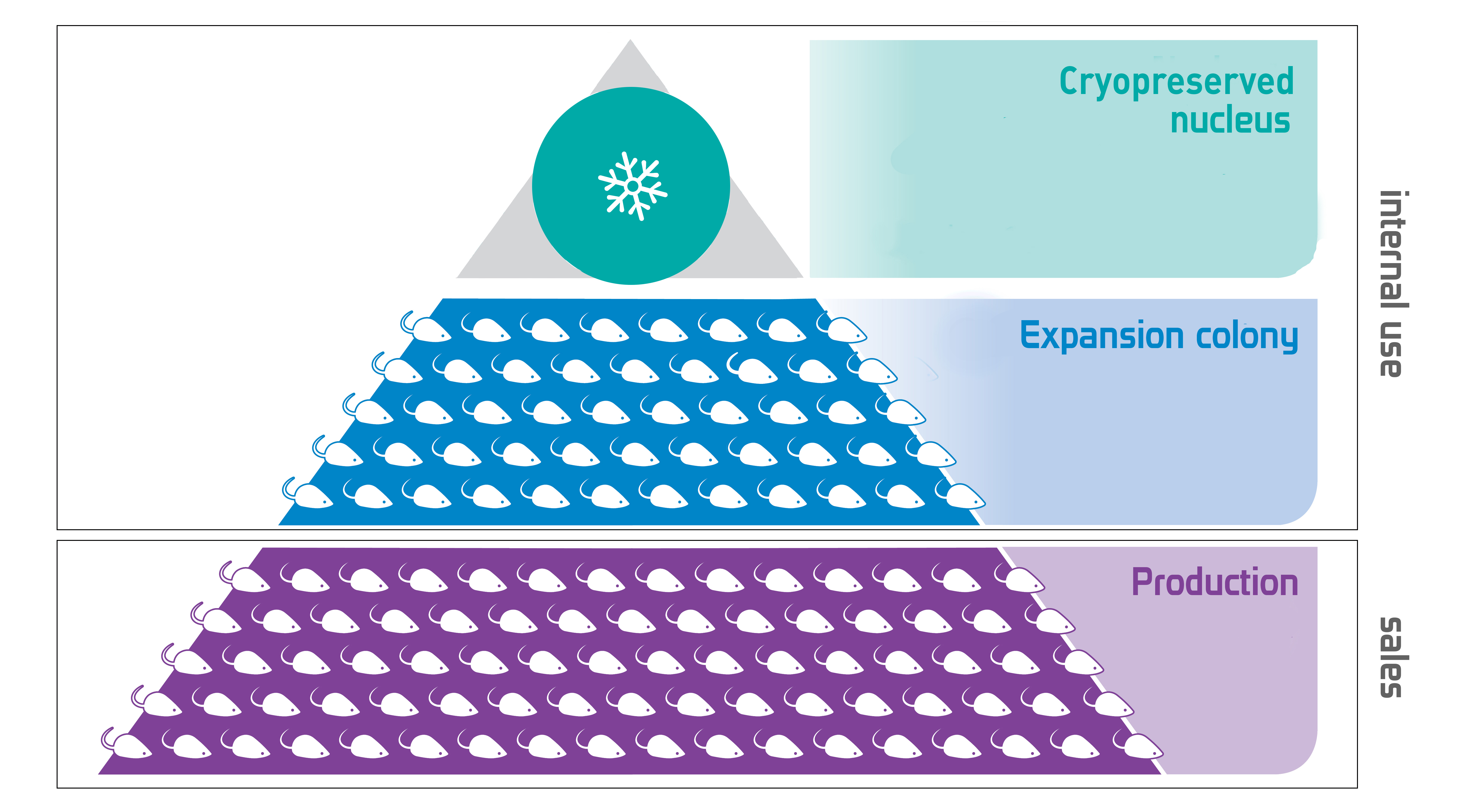 The animals delivered to the user only come from the production colony. The others are for the exclusive breeding use.

During the life of the production colony, we control and record the breeding data of our animals (zootechnical data: coat color, behaviour, size, etc.) which are part of the criteria for monitoring the phenotypic stability of the models. In addition, we periodically perform genetic tests (Diversity array 2050 SNP) within the colonies. The results of these tests are public and available to our users. These contribute to complete the genetic control of our models.

Our solutions of cryopreservation 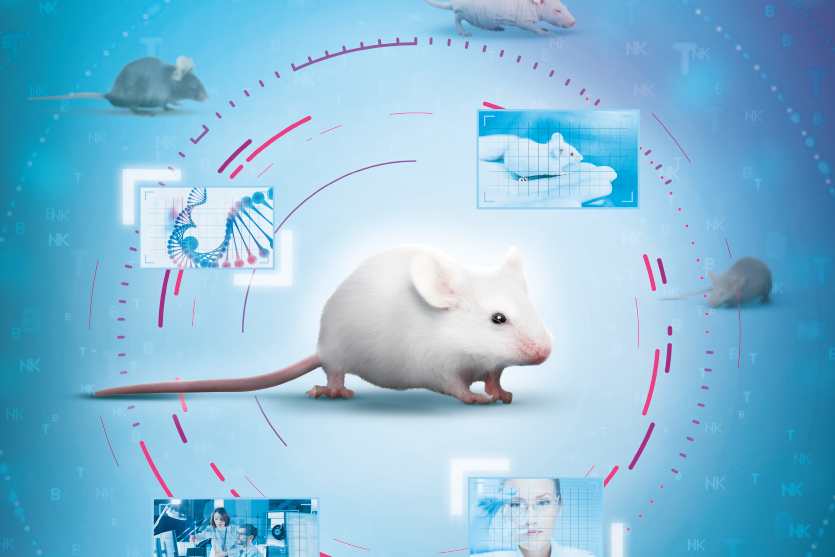 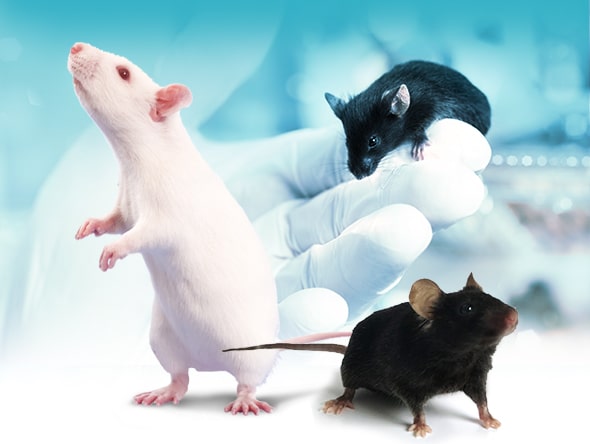 Benefit from aged animals that are always available for your research! These strains are kept for ageing in their original production units and are bred until the age of 24 months in a controlled environment and health status.Available in our permanent stock from the age of 3 weeks to 24 months. All our research mouse […]